Thomas Blackwood, his wife Elizabeth Crawford and their two year old daughter joined 43 other families to travel from Kilmarnock to London, in August 1853. They boarded the ship Colinda, a 581 ton barque, 120 feet long and 26.5 feet wide, sailing south around Cape Horn bound for British Columbia, Canada.

In 1849 The Hudson's Bay Company gained commercial rights to Vancouver Island from the British Government. They aimed to mine for coal on the island, planning to sell coal in San Francisco where prices were high. Their existing labourers and miners were flocking to the California gold rush and unable to recruit native people, experienced miners from Scotland were sought. The Hudson's Bay Company Agent in Scotland David Landale had been commissioned in early 1853 to recruit 40 miners and their families from Ayrshire to emigrate to Vancouver Island. The plan was to travel by train to London where the company had contracted the Colinda to sail to British Columbia - a scheduled 5 month voyage.

The captain of the Colinda, John Powell Mills, had failed to provision the ship adequately. He proved an incompetent ships master and against a background of increasingly harsh conditions, relations with the ships passengers and crew deteriorated to the extent that they demanded the ship put in to a port in Chile. At one point Captain Mills challenged the ships doctor Henry Coleman to a duel. Through the British Consulate in Valparaiso Captain Mills unsuccessfully attempted to have them tried for mutinous & piratical conduct. Passengers, crew and Dr Coleman testified against the captain and the charges were dismissed.

The Blackwood family and other miners families refused to continue with Captain Mills to British Columbia. Instead they were recruited by Thomas Garland who in 1852 had set up the 'Compania de Lota' to exploit the coal deposits in that area far south of Valparaiso. The story of the voyage and recruitment is told in a Chilean film with English subtitles. This is an abridged version.

Scots in Chile in the 19th Century

We are indebted to Judith Hudson Beattie Valenzuela who has completed the transcription of the log of Dr Henry Coleman aboard the Colinda when it sailed from London in 1853. The log details day by day the distressing and harrowing experience on the Colinda, including the numerous fatalities of infants.

Thomas and Elizabeth's son Hugh Blackwood was born in Lota in 1856 and was sent back to Ayrshire to be educated. Initially returning to Dalmellington, Ayrshire to stay with his grandmother Catherine Blackwood nee Campbell he eventually settled in Cumnock and raised a large family. He died in 1929 and is buried in the Glaisnock Street cemetery in Cumnock.
The rest of the family remained in Chile. In particular, Hugh's brother William (Guillermo) remained in Chile where he successfully raised a family.

Below is a photograph taken in March 2019 of Carolina Castillo, great great granddaughter of Guillermo with Robert Watson, great grandson of Hugh visiting Hugh's grave in Cumnock. 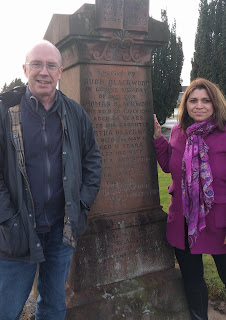 Posted by Robert Watson at 07:40 No comments:

Anyone with additional information or photographs please use the comments link at the foot of the page.
Alternatively contact Cumnock History Group
info@cumnockhistorygroup.org